After a small group of us went to the Nevada attorney general he wrote a letter to the Nevada Department of Education (NDE) then the NDE revised their memos above in this memo, saying it was up to local districts if they wanted to attempt to force children to take the SBAC test:

In the memo the NDE also wrote: "This office has requested legislative action on the question of opting out in future school years."

No NV legislative action has been taken on opting out of the SBAC test - hopefully we'll get something in the 2019 session.

Carson City School District may be taking a different position here's an email from a Carson City principal in early 2015.  The names have been deleted to protect the student, parent, and principal from the Nevada Department of Education.

Sorry it took me so long to get back to you-I was out with the dreaded flu.

I saw your email to Mr. Erquiaga and want you to know that we will have something for xxxxxxx to do during testing periods.  I will check with him about a location that is most comfortable for him when the time comes.  The testing window is xxxxxxx.  I will be happy to let you know the exact dates when we have that settled.

We see that you have received a response from the State Superintendent.  Please understand that the Washoe County School District plans to operate in accordance of the assessment guidelines as set forth by the Nevada Department of Education.

...even though there is no nevada state law supporting their position, the Nevada Department of Education (ndE) initially attempted to force all NV students to take the  common core aligned sbac exam.

Letter from Clark County School District showing they intend to follow NDE's orders, even though there is no Nevada law saying all students must take standardized tests. 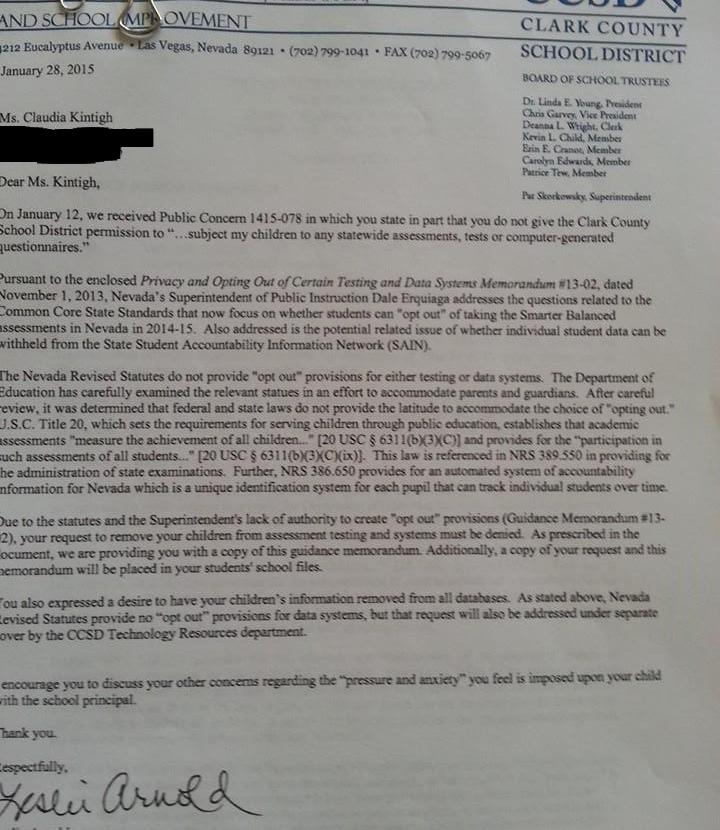 Letter from NDE stating Nevada parents can NOT opt their children out of SBAC testing or Data Mining.

Click on link below to view letter NDE sent to all Nevada schools attempting to coerce them into forcing all students to take the SCAC test.