At about 33:33 Mr. Canavero made it clear he did not want to debate the merits of CC.  Unfortunately that is what the good Drs. came to discuss, one from Boston, MA.

On 2/18/15 the Nevada Department of Education Superintendent of Nevadans new Achievement School Disctict, Pedro Martinez canceled his appearance to discuss Common Core at the Washoe Republican Women's event in Reno.

The underlying problem: in order to get federal funds during a serious economic recession in 2010, Former Governor Jim Gibbons and the NDE, adopted Common Core and agreed to establish a Statewide Longitudinal Data System (SLDS) without knowing all the strings that would be attached to getting these funds.  In addition, there was no attempt from the governor or the NDE to get teacher, parent, or community input about CC or the intrusive and unprecedented data collection, storage, and sharing from pre-K to workforce.  As all the facts about CC and the SLDS come to light many of us, including people like GOVERNOR JIM GIBBONS, Governor Mike Huckabee, Governor Jay Nixon, Governor Bobby Jindal, numerous Nevada legislators, and OVER 700 NEVADA RESIDENTS now oppose CC, Nevada's SLDS, and CC testing.

Now that all the negative implications of taking the federal funds have come to light the state of Nevada (NDE) does not want to, discuss a decision they made 4+ years ago... (33:33 video above).  As the details and facts come to light many people around the country and in Nevada now realize CC, the SLDS's (in 47 states), and CC testing was the wrong decision our children, our state, and the future of our country.

It is time the NDE allow an open and honest discussion on the education reforms they decided on, in the dark, 4+ years ago. 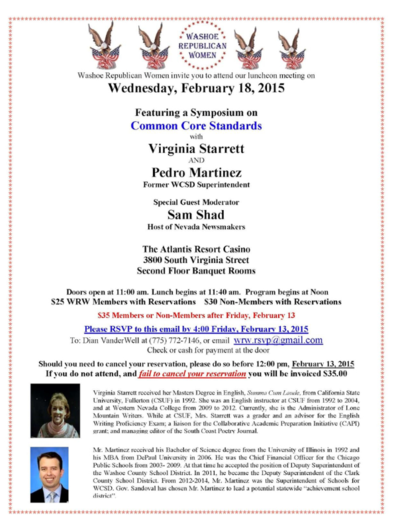